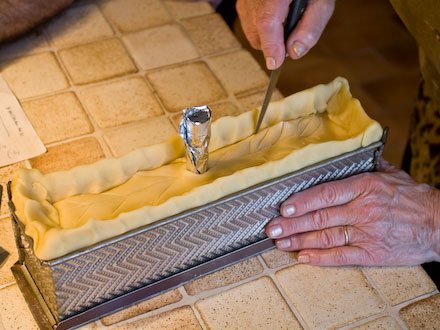 Pate en croute (or pie-crust) is a pie baked in a pastry or a pastry with jelly on top. The pie crust is cooked in a terrine. In terms of legislation, for sale in the shops, a pate must contain at least half of the meat which gives the name to the pate.

Prepare the marinade 2 hours in advance.

Start by cutting the 750 gr veal slices. The strips should be fine and regular.

Then add 8 tablespoons Cognac, mix well and marinate for 2 hours.

Stuffing: Cut the ham 450gr heel and 450gr pork loin boneless pieces. Mince it with a grid with large holes (grid minced meat). Add 2 eggs, a little spice 4, 7gr of salt (16g per kilo but only pork loin, ham was salty enough by nature).  Mix everything together to get a fine and homogeneous farce.

Butter the molds generously (if possible tins). Spread the dough and line to cover the inside of the molds homogeneously with 3mm thick layer.

Begin to fill the bottom with stuffing, with a layer of 1 cm, then the veal over 2cm centimeters, then again the stuffing 1 cm, 2cm of veal, complete with stuffing on a final cm (7cm is the ideal depth for the pate) Place the pastry lid, fold the overhanging top and pinch well to seal all (seal the edges).

Draw a pattern on the lid without piercing the dough.

Make a hole in the lid and insert a foil vent.

Add a little water (one teaspoon) with an egg yolk and mix, paint the cover and edges.

Bake in hot oven (oven with fan heat if possible), thermostat 7 for 1 hour

Once finished cooking and the pie-crust is cooled … it remains only to pour some jelly though the vent, and put in the fridge …

and the next morning to unmold the pie-crust.

In the Middle Ages, pies and terrines were one of the main bases of the castle cuisine in regard to meat dishes. These two methods of preparation allowed to keep the meat longer. The crust of the pie was also initially not designed to be eaten but only to help with cooking and preservation. Over time, the pastry crust became consumable. Nowadays, every year more than 6531 tons of pies are consumed in France.

There are many variations, particularly regional, which differ primarily by the type of meat inside, usually made of veal and pork, but with many variants, including poultry. There is also a possibility of filling with game, alone or in a mixture with  flavored stuffing, with mushrooms and pistachio for example.

A variant very common is the pate en croute Richelieu. It features a mousse of chicken livers in the center.

The pate is usually served as entree. But in a smaller form, it can be served as an appetizer: it is then the pate cocktail.

In Champagne-Ardenne in particular, the “pie-crust” is more like a pastry product, consisting of minced pork linking pieces of rabbit, poultry, veal … or pork, marinated for example in Marc de Champagne and spices, stuffing a crispy puff pastry, a bit like a ham crust. It is served warm, often as a single dish with a green salad. There is also a specialty very similar in Lorraine.

It is usually served as an appetizer accompanied by condiments, including pickles and onions.

The pie crust is one of the oldest dishes of our culinary heritage. Tarts and pies were the basic castle cuisine in the Middle Ages. We must say that it should not have been easy to cook without potatoes, tomatoes and without all the vegetables from America.