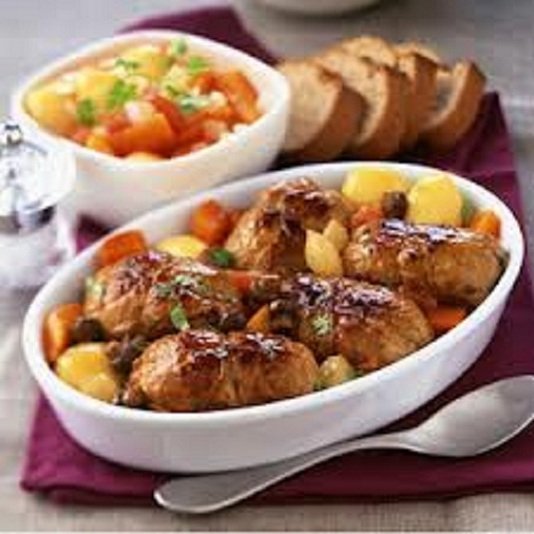 The story dates back from the roulade in the Italian Quattrocento. At that time, a master chef is the talk of the town. This is the Milan Maestro Martino, officiating for the famous, he crosses the country to and fro in search of local specialties. The sum of its culinary knowledge is recorded in the famous Libro de arte coquinaria (ca 1460), a work suspected to have been written with both hands with Bartolomeo Sacchi nicknamed Platine, future author of De honesta voluptate and valetudine.

Martino gives the first known recipe of polpette (Per fare polpette di vitello carne o altra bona carne). He cut a thin slice of veal leg on which he spread a mixture of fennel, pine nuts, parsley, marjoram, bacon, spices and salt that he has previously chopped. He wraps it all up and roasts on a spit.

A century later, it seems one of the greatest successes of the Italian culinary literature, the Opera (1570) of Bartolomeo Scappi. His polpette now consists of a slice of beef, not veal, on which it extends bacon, ham, cloves, egg yolk, cheese, pepper, cinnamon, parsley, mint and thyme.

Everything is rolled, spit-roasted and braised in broth, verjus and currants. He also gives a recipe of polpette with Sturgeon made according to the same principle.

The Liege citizen Lancelot de Casteau, master chef of the prince-bishops in the second half of the 16th century, is not shy of Italianism. In his Ouverture de Cuisine (1604), he gives his version of the polpette (veal and sturgeon), he calls poulpette (first known occurrence of the term in a French text).

Its use slices of veal thigh that reminded Martino, but the egg, cloves and vertjus remind us back of Scappi. Lancelot, original as usual, added ingredients that are not listed in Italian recipes, namely nutmeg, ginger, beef fat (instead of bacon), salted silt and mace.

The recipe can be found in a unique manuscript of the second half of the 18th century written by an anonymous author in the area of Havelange. This simplified version has an original name: the “rat.” Slices of veal rouelle are covered with a device consisting of lard, parsley, shallots, nutmeg, salt and pepper. They are rolled, seared, then stewed in broth, wine and a bouquet garni.

The successors of La Varenne are changing the recipe under both names fricandeau and paupiette. The stuffing of Massialot is particularly sophisticated, as often in classic French cuisine.

A mixture of stomachs of poultry and game, sweetbreads, truffles, mushrooms, herbs, marrow, bread, milk, cheese, cream and eggs, the stuffing is shaped, breaded and fried before being placed on a slice of leg of veal put itself on a slice of bacon.

In the case of fricandeau, the unit is not rolled, unlike the paupiette, which roasts, breadcrumbed, and steam-oven cooked in a bread-based coulis, with truffles and sweetbreads.

In Le Cuisinier Gascon (1740), the farce of the Italian paupiette is enriched with grated parmesan, pine nuts and currants, which brings us logically to the first Italian versions of the recipe. The term paupiette appears in La Suite des dons de Comus, by Marin in 1742.

The paupiette continues its merry way in French culinary literature throughout the 19th century. In Escoffier, we find a plethora of recipes for meatballs, whether meat or fish.

Ultimately, it is the veal paupiette that outweighs the other versions. In Belgium, the recipe takes the name of the “headless bird” formula that spreads to France.

The dish remains popular throughout the 20th century but lost its originality to be reduced to a slice of veal stuffed with sausage meat served with vegetables. That’s why we offer the detail of an old recipe, both refreshing and exotic, made by a master chef in Liege.