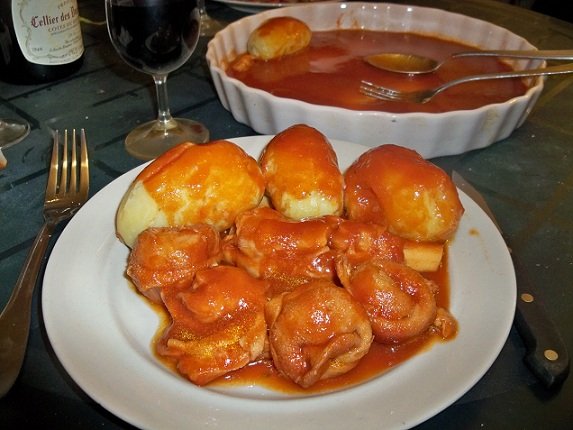 Tripes… During antiquity, Homer, the famous Greek poet already referred to them. According to him, Thésis, Achilles’ mother had prepared for her son a dish of beef tripe after she plunged him into the Styx, to make him invulnerable … A few years later, the Greek writer Athenaeus, in turn, made mention of a dish composed of “intestines of cattle.”

Great warriors also loved it… Thus, William the Conqueror accommodated them with… apple juice! Everyone has his own recipe! Some French authors, too, could not resist the charms of guts! Thus, Rabelais made his character Garguantua born after Gargamelle – mother of the latter – had eaten a “plateful of gaudebillaux”, that is to say “guts of coireaux and coireaux are fattened cattle in the nursery and almost Grimaux “.

According to etymologists, the term “tripe” – then spelled with two “p” – appeared for the first time in 1243, it would be derived from the Italian tripe, itself derived from the Arabic therb..
Very appreciated, tripes were subject to serious regulations. In the Middle Ages, the guild of tripe-makers was composed of six families. They alone had the right to prepare the gut.

They then sold to the hawkers. In 1738, the Police Lieutenant of Louis XV signed an ordinance regulating the profession of “cooker of guts.”
This is during the nineteenth century that the famous recipe of tripe of Caen – according to the legend, invented by Sidoine Benoit, whose identity is still unclear today – became known in all Paris …

Feet and packages were traditionally enjoyed during Mardi Gras, in the South of France. Archives show that in 1476, the feet of sheep and beef were served at the funeral of Canon Stephen Roberti by his fellow St. Trophime. Two centuries later, the poet César Pellenc in The Pleasures of life, presents them as follows: “rich and poor equally use them in their ordinary life” The feet and packets first appeared in a cookbook in 1888.

It is then the work of Morard on Provencal cuisine. Soon this specialty became known throughout France, with canned version easily available.

Peel and chop 2 onions. Peel the carrots and cut into slices.

In a thick-bottomed pan, saute in olive oil, onions, carrots and bacon. Top with lamb’s feet.

When everything is seared, add garlic, quartered tomatoes, the onion stuck with cloves and chili pepper.

Add the white wine. When boiling starts, add the packets, salt and pepper.

Put the thyme and bay leaf and add a little water to cover the packages.

Cover and cook for about 8 hours on low heat.

Remove the feet and packages, remove bones from the feet.

Half an hour before serving, place the feet and packets in a baking dish.

Serve with new potatoes in their skins.