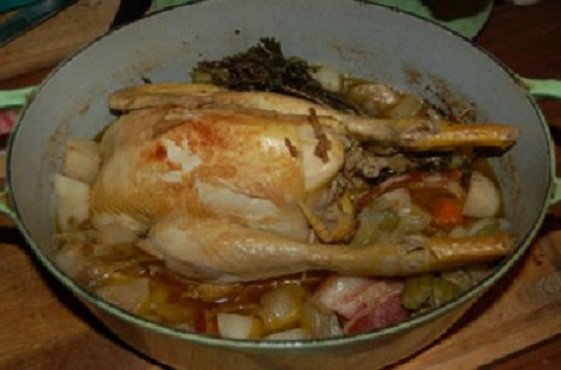 Poule au Pot, or Boiled chicken is a dish belonging to the French gastronomic tradition for which there is a recipe a la béarnaise.

It is to accompany a chicken stuffed with vegetables (carrots, turnips, leeks, onions, cloves) and beef and bring to a boil thensimmer like a pot-au-feu.

The tradition wants that King Henry IV, concerned about the well-being of the simplest subjects, has repeatedly said: “If God gives me life I still do that there will be no peasant in my kingdom that has no way to have a chicken in his pot.

“Some argue that this formula was addressed by the king to his minister the Duke of Sully, others such as the historian Jacques Bourgeat, think this conversation was between the king and the duke of Savoie.

Poule au pot was repeatedly the subject of epigrams launched against the successors of henri IV.

Protestant from birth, this native of Pau brings peace to the kingdom when he abjured his religion in order to be crowned in 1593. The country then comes from decades of religious wars. All areas are to be rebuilt.

Aware that the most urgent problem is food and agriculture, the king orders the agronomist Olivier de Serres a work now famous, the theater fields of husbandry and agriculture. Henri IV approves his ideas and he asks his minister Sully to enforce them.

He adopts a formula then also famous: “Ploughing and grazing are the two breasts of France.” It is thus becoming a real desire to restart the agricultural sector, damaged by 40 years of war. Assassinated by Ravaillac, Henry IV the peacemaker remains one of the most popular figures in history.

At the dawn of the French Revolution, singing “Finally, the chicken pot will be. We can at least presume.

For the past two hundred years that we have been promised. It has not stopped the plucking. ” Louis XVIII tried to be innovative, considering that Henry IV had promised the gallinaceous French on the table every Sunday, according to another formula given to HenriIV “I want every laborer in my kingdom to put the chicken in the pot on Sunday”