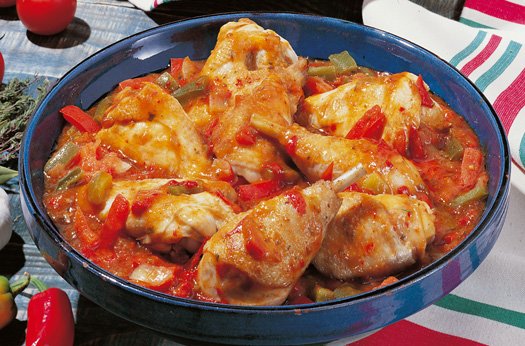 This specialty comes from the Basque Country, between sea and mountain, between France and Spain, at the heart of the Pyrenees. Basque chicken recipe is one of the best known of the South West region.

Melt the goose fat in a casserole

Fry the chicken in the fat

Wait until each piece is golden brown, then remove from the pan

Put onion, garlic, peppers and tomatoes in the melted fat

Cover the casserole and simmer for ten minutes

Remove from heat and all fold in the chicken

Bake for half an hour to thermostat 6 or 180 degrees

Wait fifteen minutes before removing from the oven

Serve hot with rice or mushrooms

Tip: Moderate use of salt because the ham is already very salty

The Basquaise or piperade, from Soule (eastern part of the French Basque Country) was originally a dish of vegetables and bread. Gradually, it became a complete dish accompanying tuna, on the Basque coast, or chicken, more inland. Hence the birth of Basquaise chicken and not basquais!

After being cut, pre-cooked and panfried in a skillet first, the chicken is dipped in a sauce of vegetables called “piperade” (derived from the Basque word “biperra” which means “pepper”). This is a sauce made of garlic, onion, tomatoes, peppers, Bayonne ham bone and olive oil.