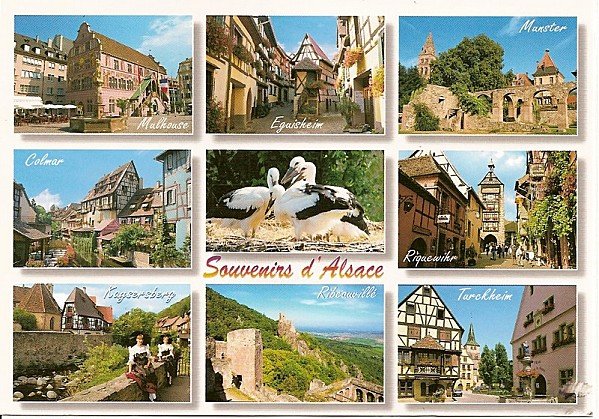 Alsace, one of the most “starred” by the guides, values at its best its gastronomic heritage  … sometimes its important gastronomic repertoire. Despite the influx of tourists and a trivialization due to Strasbourg and several historic cities located on the Route des Vins, many restaurants strive for quality and, quite often, are very friendly. Alsatian families continue to attend with a remarkable continuity and meals between friends are much more usual than elsewhere. There is crowd on Sunday afternoon in restaurants and well-known farm inns, even well away from major centers (Munster Valley, Haute-Bruche “Country of cabbage”, Ried, region of Brumath, Outre-Forett, Florival, Sundgau).

Among the recipes and traditional dishes from Alsace are the onion tart (Zewelkueche), the Cervelas vinaigrette, asparagus (Sparichle) accompanied by three sauces, this Baeckeoffe that is a typical stew, flamed pie, more exactly : Flamekuche or Flammekueche, now known throughout France, formerly a part of the Specialties of Bas-Rhin near Strasbourg, sauerkraut, or Schiffala or Schiffele, rolled dough with pork and veal Fleischschnacka. Game – the right of hunting is specify to the region – and pork, despite the small local pig production, are in the spotlight.

Pate of foie gras, produced since the seventeenth century, is considered an Alsatian specialty … as much as in Landes and Perigord (a version of the block, in a round pastry crust, was introduced in 1780 in the table of the Military Governor of Strasbourg). It should be noted that Alsace does not raise many more geese than pigs, it is nevertheless an abundant  delicatessen. However, Alsace breeds more ducks for foie gras production.

Traditional desserts are numerous: kugelhopf or kougelhopf, whose name is often “Frenchified” in Kouglof, fruit pies, including plums and cheese, a variety of biscuits and small cakes called Bredala (specialties of the Advent), gingerbread.

(The names of products and dishes, in local dialect, varies greatly from one mini-region to another: transcripts are risky, sometimes quite abusive francisations as “Flammkuchen” are plentiful. But everyone understands. Whatever we translate as  Baeckeoffe, Bäckkeoffe, Bækoffa, Bækenoffa, Bækaoffe: it will always be a mixture of meat, potatoes, onions, sprinkled with white wine, cooked for a very long in an oven in a sealed pot. Though the terms more or less Anglicized can be written entirely in lowercase letters, the use of the capital letter, as in German, is often retained).

The Haeberlin family, located in the heart of the Ried, has earned a worldwide reputation: the great restaurateurs and chefs of the highest international level attended in spring 2008 to the funerals of Paul Haeberlin, famous for his talent and modesty.For several years now, his son Marc runs the kitchen of the great house in the Colmar region. Highly respected in the business, representing an elite “Tradition & Quality” of Alsatian  and French gastronomy, Haeberlin have continued to embellish the Auberge de l’Ill (this family business became an institution in the middle of the last century ). It is located on the Ill, shaded by weeping willows, in Illhaeusern, 15 km north of Colmar; it has been constantly awarded three Michelin stars since 1967.

For many foodies, the expression “the two Paul” was immediately in reference to Haeberlin senior and Bocuse, they have always been great friends (Illhaeusern is paired with Collonges-au-Mont-d’Or).

Jean-Pierre Haeberlin, Paul’s brother, plays an important role in the house. He  is also an excellent watercolorist, often inspired by the Ill, its slender boats, weeping willows, the Ried … It is very much in the elegant decor, both typical Alsace and ultra-contemporary, a restaurant as famous for its charms as for its cuisine, accompanied by a hotel of more discreet modern luxury.This is at the Inn that worked the World’s Best Sommelier Serge Dubs and Best Sommelier of France Pascal Leonetti.

Half a dozen head-chefs are considered by top guides and the culinary press. Émile Jung, well-known outside of Alsace, has maintained a reputation as an advisor and participant in numerous culinary events, after the sale of the Crocodile held for thirty years as an institution Strasbourg. Forty cooks from two departments are highlighted by national gastronomic literature (Michelin’s Guide Rouge, Guide Gault-Millau, Guide Pudlo).

Taking into account a multitude of small restaurants, cozy and welcoming, it is much more than the French average. Alsatians, despite the normalization related to the influx of tourists, including Strasbourg and along the Route des Vins, is frequently compared to Lyonnais regarding their attendance of restaurants of all levels.

The Association of Master Chefs of France, which has many members in the Upper and Lower Rhine, had its revival with the Alsatian Fernand Mischler, now retired, who has made his Lembach restaurant, Le Cheval Blanc, a real institution.

Alsatian hotel cooks form the majority of winners of the Marianne trophy and members of the association Saveurs de France-Saveurs d’Europe. They promote products and traditional recipes at events often taking place in their region.

Usually arguing an attachment to their province, their valley or their Ried, without refusing to follow trends, modernizing as possible the local culinary repertoire (which is not easy in large kitchens), they often innovate tactfully, sometimes boldly (Georges Klein, Arnsbourg at the border with Lorraine – North of Alsace, is particularly inventive).

They frequently run demonstrations overseas, China, Japan, the United States, Russia, the United Arab Emirates. Marc Haeberlin also oversees a fine dining restaurant in Tokyo. Émile Jung, known for his kindness and his love of tramping, participates in numerous events in France and outside of France. Michel Husser, who keeps at a high level the familial Cerf of Marlenheim, toured the world and played willingly with Mediterranean flavors. Jean-Yves Schillinger, Michelin star, son of a famous Alsatian chef of the last century, associates with technical brilliance flavors, sometimes unusual, in a home decor superdesign in Colmar in Alsace, with a fun historical façade.

Antoine Westermann had left the Strasbourgeois Buerehiesel , where he was awarded three Michelin stars, to his son, to take over the destiny of Drouant in Paris. Christine Ferber’s jams (Niedermorschwihr) are known throughout France.

The pastry chef Pierre Hermé, Paris became a personality, as installed in Tokyo boasts highly Alsatian origin. He set up a manufacturing unit in the Haut-Rhin.

Author of stories, novels and essays, as well as several cookbooks, Simone Morgenthaler worked hard, for twenty years, to enhance the Alsatian culinary world. Especially with the issue of the dialect,  France 3 Alsace ‘Sur un Siess’ is very popular, presenting Hubert Maetz, chef “star” Michelin from Rosheim (the Rosenmeer), known for its commitment to regional products (also winemaker, he interprets in personal way the old recipes from Alsace).

An abrupt discontinuation of the program, in September 2008, shocked many Alsatians, speaking the dialect or not, and resulted in a petition signed by over 3000 people and the reactions of several politicians, including Philippe Richert, Vice President of the Senate, MPs and councilors. Elected officials commit to save “Sur un Siess,” as said the Dernieres Nouvelles d’Alsace, in late December 2008 (the local newspaper had announced the end of the show on September 11, without explaining). It was not followed through.

Beer is still brewed in the Bas-Rhin, but Meteor was in 2008 the last family business (Schutzenberger stopped producing a few years ago).