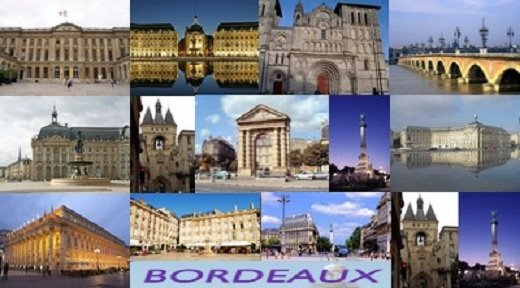 Aquitaine, for a long time Roman, Frank duche under Clovis, reunited by Charlemagne, English by the marriage of Eleanor to Henry II, was for long known as Guyenne. From the estuary of the Gironde to the Pyrenees, this vast region has historical treasures that delight its visitors.

So rich in traditions that it take more than a few weeks to get around, we will sumarize the region bordered by the Atlantic Ocean, by its long sandy beaches, its bright pine forests, its famous vineyards, its not-less famous Agen dried prunes …

Bordeaux is famous for its wines, but few know that this is the first place where people cultivated oysters in France. In 1868, the damage on a Portuguese ship bound for England forced the sailors to throw overboard part of its cargo (oysters) in the mouth of the Gironde.

These oysters were adults and they allowed the oyster, victims of a crisis of production of oysters of Arcachon (only place to grow oysters in France at that time) to find a new source of income. Thus began the cultivation of oysters in a large scale in France.

We know that the vineyard existed before the Roman conquest. After this, the wines from this region seemed to be very popular with the aristocracy of ancient Rome. The Gallo-Roman poet Ausonius, who had a vineyard, left a testimony. In the Middle Ages, these wines experienced great success in Britain and the Netherlands, in fact, Bordeaux, which was an English port at the time, offered the possibility to easily export to distant destinations by sea.

The 18th, 19th and 20th centuries saw the Bordeaux wines triumph all over the world. In 1855, the Bordeaux Chamber of Commerce decided, after some deep researches, to rank officially the Bordeaux wines that were already famous for their quality. This classification, supplemented since, is still in force.

The maritime climate with the presence of pine forests along the coast and large bodies of water can be a micro-climate for growing grapes. Temperature changes are small but the winters can be harsh sometimes. The summers are hot and sunny but sometimes stormy autumns are warm and mild.

The discovery of a region is never really complete if we do not try its gastronomy.

Warning, this region is not suitable for people who are dieting. Aquitaine cuisine offers a festival of dishes, rich and tasty. Thinking about it, one has only one desire: to run to the supermarket to rob it!

Aquitaine, especially the Périgord, is a bastion of Southwestern cuisine. The region produces foie gras (duck and goose especially) and is expert in the cutting and cooking of poultry: duck, stuffed neck, confit, etc..

They enjoy red meat steak with Entrecote Bordelaise and smallgoods such as Bayonne ham. Finally, there is a lot of truffles in the region.

If you leave the land to dive into the wonders of the sea, eat oysters of Arcachon. In addition, many fish found in the ocean or rivers can be cooked “à la bordelaise”. To be mentioned especially lamprey, seasoned often with wine, ham, garlic, shallots, etc..

Finish with a condiment: Piment d’Espelette. It is colored and perfectly on steamed potatoes.

One of the major specialties of Aquitaine, the Agen prunes. There are also Périgord walnuts, which can be pressed for oil. The two often compliment the dishes.

As desserts, you can not miss the Landes Pastis, the Basque cake or Tourtiere with Armagnac. The

Cannelles are also essential. These cupcakes are becoming true wonders when properly made and eaten fresh.

Coming in the first place, the Grands Crus. We obviously think of the red wines: Saint-Emilion, Medoc, etc.. but also the Sauternes and other delights. We can evoke as well a specialty of Landes: Armagnac. It is a brandy flavored with plum or violet.

It was there only the most famous specialties. The land still holds many treasures. Before going to find them there, you can already cook a good breakfast menu: foie gras drizzled with sauternes, duck confit, sheep’s cheese from the Basque country, a small fluted glass of Armagnac to digest.