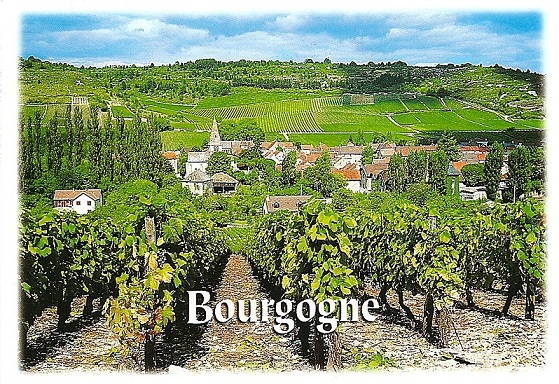 Burgundy (pronounced [buʁ.gɔɲ] Bregogne-Morvan in Burgundy, Burgundy in Arpitan) is a historical region and administrative center is located in France and consists of four departments: Yonne, Côte-d’Or , Nièvre and Saône-et-Loire.

The 10 largest cities are: the capital of the Dukes of Burgundy and the county town of the region, Dijon, followed by Chalon-sur-Saône, Nevers, Auxerre, Macon, Sens, Le Creusot, Beaune, Montceau-les-Mines and Autun.

With its four departments and 31 582 km ² in size, Burgundy is one of the largest regions of France (7th place). It covers 6% of the national territory. It has 2,046 municipalities.

Its inhabitants are called the Burgundians and Burgundian.

Region renowned for its gastronomy, Burgundy is also rich in architectural heritage, castles to cadoles, through abbeys andcathedrals.

Burgundy is a land of gourmets as a history book open. It is here that large pages are written, as at Alesia, where Vercingetorix held a seat against the armies of Julius Caesar in 52 BC, or to the

Benedictine Cluny Abbey did their tenth century the greatest spiritual and intellectual center of Europe.

The fourteenth and fifteenth centuries, the duchy independent of the crown, was much larger than today. Under Charles the Bold, it stretched from Spain to England and Italy to Flanders.Although attached to the kingdom of France in 1477, he managed to keep until the French Revolution some form ofautonomy. Current contours of Burgundy, they date back to 19602.

Burgundy, it is above all a land of wine, fine wines, and the food is naturally impregnated. The traditional beef bourguignon, wine-based dish, the dishes so-called “poached”, that is to say, cooked with bacon and red wine including eggs or coq au vin, and the local ham, all the dishes of the region are made and/or eaten with a wonderful wine from the vineyards of Burgundy.

The hills dominating the plain of the Saône are lined with fine wines Aloxe-Corton, Nuits-St-Georges, Vosne-Romanée, Vougeot, Chambolle-Musigny, Gevrey-Chambertin … We arrive in Dijon, whose reputation has crossed borders with its famous mustard and Kir, composed of Burgundy wine and crème de cassis. In Macon, which is praised for its Pouilly Fuissé, there is also the Charolais cows with a white dress, of very good quality. Not far away, wanders the famous Bresse chicken. In short, a rich and generous land worth thousand detours.

The fish is found along the Saône, with all the ingredients that will comprise a specialty of the region: pauchouse, a kind of freshwater bouillabaisse based on tench, perch eel, carp, pike, white wine and croutons rubbed with garlic. For dessert, how about a charlotte “rigodon” or tartouillat with pears? Another area worth visiting, you were warned, France is rich, very rich in terms of gastronomy …

The vineyards of Burgundy are: