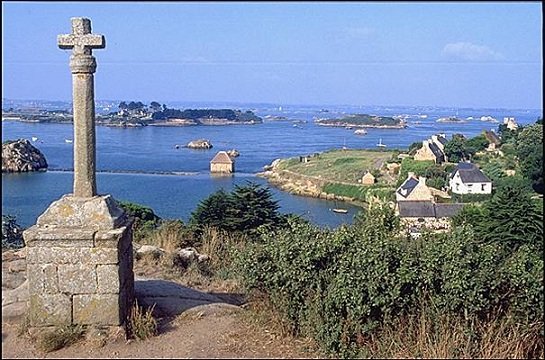 Bretagne, land of legends and mysteries, takes its name from the inhabitants of the island of Britain in the fifth century who emigrated en masse to Armorica. Quasi-independent Duchy until the XV century, in 1532 was signed the Edict of attachment of Bretagne to France.

After the famous revolts of Chouans during the revolutionary period, Britain is now famous for its Menhirs, its rugged coastline, its folklore and musical traditions, as well as its many fishing ports that make it a popular tourist region of France and also where you can enjoy the happiness with seafood, starting with a few oysters from Bretagne.

Another aspect of this craze for tourism, delicious crepes, sweet or savory pancakes that are accompanied by a glass of cider and sometimes preceded by a glass of Chouchen, a local aperitif made from apples. Lovers will enjoy a few slices of Andouille de Guéméné that is served cold as well as hot by many restaurateurs.

Another regional delicacy, the Far Breton goes wonderfully with a little Muscadet from Pays Nantais. Fans will enjoy butter cake with a delicious Kouign-Amann accompanied by a small glass of eau-de-vie which concludes in fine style an evening with friends, especially if the latest comes from the Rhuys peninsula.

The cuisine of Bretagne is based on seafood, the outdoors and the sea, it is a fresh mix of mackerel and sardines, pork rillettes and Breton cakes. Do not forget the cider and crepes as a sweet treat.

If you are so fond of the sea, Bretagne offers, in season, the gourmet delights of extraordinary freshness. From Rennes, capital of Bretagne, there is the cuckoo, whose meat and eggs are highly sought after, Petit-Gris, the famous snail swallowed with garlic butter and parsley and, of course, the flour or buckwheat crepes.

In Cancale, there are the famous oysters (flat or hollow), depending on the season or the tide. There are also legendary madeleines that contain the taste and lemony smell of childhood. Then there are the seafood, shellfish, fish soup, sauce “Armoricaine”, sausages, smoked raw ham, crêpes, the Far Breton, the 4-quarters cake, cookies with butter …

Brittany went through centuries trying to keep some basic ideas:

Power to the people represented by a Duc Breton was a feature of the region even at a time when the French people could suffer the adverse effects of hereditary monarchy.

The independence of this country is something that was very much at heart of the people who never hesitated to show their valor during the bloody wars (especially during the War of Succession) in which it shone by its prowess in pushing away the invader. The main threats came from the French and Bretons (from Great Britain).

The independence of Bretagne was the subject of many sacrifices, particularly on the part of Anne of Bretagne, who had to marry Charles VIII to save it. However, her daughter Claude does not have the temperament of his motherand could not ensure any longer its independence.

At the dawn of the French Revolution, Bretagne formerly called “Peru of France” became a province completely ruined. Even the birth rate is falling in this country where large families are traditional.

In the aftermath of the Revolution, in March 10, 1793 is issued a decree instituting conscription. This decree establishes that contrary to what was held by Anne of Bretagne, the Bretons could be called upon to fight outside Bretagne. This decree raises anger and Bretons refusing the idea of leaving the homeland to be dying in a foreign land took up arms in protest.

The nineteenth century in Bretagne see the birth of philosophers such as Ernest Renan, Francois Rene Chateaubriand and Lamennais who spent his childhood lulled by the sound of the sea rubbing rocks.

From 1805, the survival of Breton consciousness is in the hands of poets and historians, such as Jean Francois de Gonidecborn in Le Conquet in 1775, who founded the Celtic Academy.

In 1821, is published a language dictionary Celto-Breton and in 1838 a Celto-Breton grammar. Then came the French-Breton dictionary in 1843 by Amable Troude. At the same time, historians gather their knowledge for future works. Now for generations, in the early twentieth century, a revival of art can be seen in Breton literature through poets and writers.