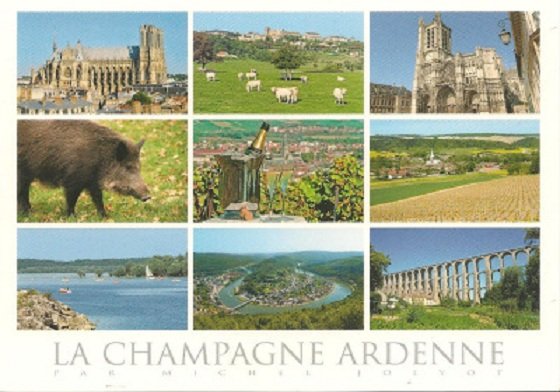 Champagne is the first component of the “Belgium” which are set in waves between the fifth and first centuries BC. AD, five people of Celtic origin.

At the end of the First World War, the Champagne-Ardenne region is recognized as the most affected in France. New stride and bombed by the warring armies in 1939-1945, it ended it on May 7, 1945 with the signing of the surrender of Nazi Germany in a college of Reims, by the HQ Allied Expeditionary Forces in Europe.

Not sure the traveller mentions spontaneously Champagne-Ardenne in the top tier of French gastronomic regions. Not sure, even, that he is able to indicate only one or two specialties (ah yes! Andouillette, perhaps?).

However, if the reputation of the food products still not cross the boundaries of the region, the curious gourmand will not necessarily have to look far for these wonders which will leave a memory like the taste of come back to it.

For example Beer, Champagne-Ardenne had in the early twentieth century some 350 breweries. Beer can also take advantage of a beautiful tradition, locally in Sedan, the first princes of La Marck produced it from 1425. Today, a dozen breweries, crafted mostly regionally, have a name up to date, the best known brands are Ardwen (Ardennes) or Valmy (Marne).

The wines of the Coteaux Champenois (WCA since 1974) are produced in small quantities as from the same grapes and terroirs as champagne, which is given priority. Obtained from pinot noir, red, with aromas of cassis, raspberry, cherry, the most famous are the bouzy Cumières and are very pleasant to drink young.

Less known for its apple for its vineyards, Champagne-Ardenne yet developed cider pasteurized or sterilized, mainly in the Othe (southwest of Dawn) and in the Ardennes. Twenty cider industry provide local cider, a little more acidic than its cousins from Brittany and Normandy, a modest revival.

A third marc, two-thirds of wort containing added sugar, that (in short!) is how to develop the ratafia, that is what Champagne is to Pineau Charentes, which is consumed in the same circumstances, usually appetizer.

Champagne is used for cooking a great variety of products and specialties from the disparity in lifestyles between the different sub-regions that make up the Champagne.

The champagne cooking as the method of preparation can not be distinguished from other French regions, including the Paris Basin.

Among the products of Champagne, it is obvious, who does not know the Champagne? This world-famous wine that represents luxury and gastronomic refinement of France is by itself the reputation of the region and abroad. But the “king of wines” must not forget that the cuisine champenoise also derives its wealth from its peasant tradition, ancestral work based on agricultural products and wine, and hunting and fishing, from different terroirs across the region.

Each of the four departments of Champagne, from north to south, Ardennes, Marne, Aube, Haute-Marne, are taking advantage of its products and its own agricultural resources.

Ardennes cuisine is based on the ancient principle of hearty food and happily uses starchy foods such as potatoes. Ardennes, they say, are the realm of cooking potatoes.

We must cite the white sausage of Rethel or Tagnon, the game dishes, especially wild boar in large numbers in the Ardennes forests, full of game. As typical Ardennes cakes, we can mention: the Vaute, the tantimolle and the berdelle, those kinds of pancakes are served savory or sweet, but also the sugar cakes and cake half-hard.

The traditional dish of Champagne remains the most popular Potee champenoise (the “joute”) with cabbage, bacon, ham, beans, carrots and potatoes. Mention should be made of the others, pig trotters Sainte-Menehould cooked in butter with garlic and chives, the tripe champagne way, cooked in champagne, champagne poached egg, fish: pike of Lac du Der served with champagne sauce.

Wooded areas provide good harvests of mushrooms and to a lesser extent, truffles, including Haute-Marne, Champagne grey truffle (also known as the “Jewel of the woods”).

The main dishes of vegetables are cabbage potee, potee champenoise or champagne sauerkraut (simply cooked in champagne) like sauerkraut Brienne.

The sauces are made from champagne for poultry and fish, or mustard of Reims, or Reims vinegar. Butter as in most parts of northern France takes a large place.

The main dish of Champagne with fish is trout, fished in small rivers leading to the Champagne valley, champagne prepared.

Champagne is producing cheese from cow’s milk: the AOC the most common is Brie cheese, followed by the AOC of the southern region Chaource, cow’s milk, creamy, and Langres cheese is cylindrical, soft and washed rind. Its crust is thin, yellow to brown depending on its ripening time. This is a character cheese full of flavor.

Desserts of the region are mainly biscuits, the best known is the Biscuit rose de Reims, fresh eggs, flour and sugar. Croquignoles biscuits are very dry and crisp, pink or white that is enjoyed with cream or frozen desserts with fruit or coffee. Or the shortbread in the shape of a champagne cork. It is a very fine sable, containing almonds and champagne.

It was the Romans who brought the vine during the conquest of Gaul (the region, approximately in 57 BC.).

The appearance of sparkling wine Champagne – fruit of a second spontaneous fermentation in the spring following the harvest – is attested at least in the early fourteenth century when white wines are appreciated for their natural sparkle. There are probably where the ancestor of champagne is.

In 1493 appears the term “champagne”, referring to the wine produced on the territory of the geographical and administrative entity of the area of Chalons.

At the end of the seventeenth century, when Pierre Pérignon (1638-1715), the famous monk of the abbey cellarer Hautvillers, near Epernay, better known under the name of Dom Pérignon, has never been “the inventor “of champagne, his talent has undoubtedly been to practice assembling the finest wines available to him in order to obtain the highest quality.

Early eighteenth century, Champenois learn to lather artificially the wine. On March 8, 1835, a royal decree was written, formalizing the appearance of a bottle of champagne.