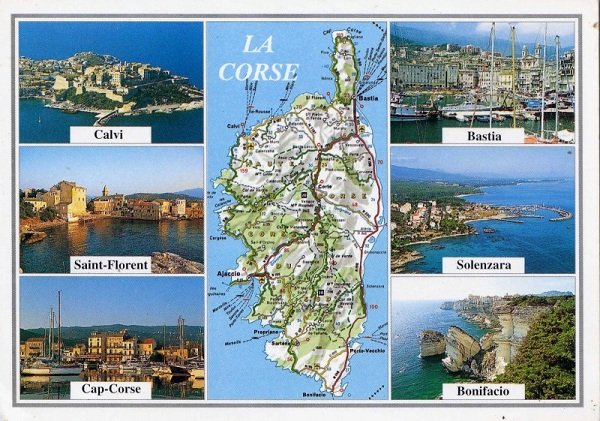 The history of Corsica is that of an island that became French in 1769 and has often been subject to strategic issues and external influences, while maintaining a strong particularism, due to its relative isolation.

Coveted by the various powers of the Mediterranean, it has long remained in the areas of influence Italian-Tuscan Carthaginian, the Corsican language being the most vivid illustration.

Real “mountain in the sea” with a central ridge north-south along its entire length, the result of the collision by the rotating plate Corso-Sardinian (initially coiled in the Gulf of Lion) and Italian plate, inland Corsica was a place of refuge for the native population of the island, where is developed and maintained a very ancient culture.

Its specificity and originality are the product of a complex history. With 8778 km², it is the fourth largest island in the Mediterranean after Sicily, Sardinia and Cyprus.

Corsican cuisine is simple. The Corsican is generally simple, and, as he did in the past, it is not just lunch “in the drawer”, which means that the main meal consisted of his chestnut held in reserve in a drawer, he eats some dishes whose basis is provided by fish, shellfish and other “seafood”, which are very abundant on all coasts of the island.

The pantry is pretty well stocked in Corse. The sea provides an abundance of fish, shellfish, lobsters of exquisite flesh and other crustaceans. The lakes and rivers of the island are home to trout and lamprey, whose flesh is very delicate.

The garden provides good Corsican vegetables and orchard fruit are delicious: plums, peaches, cherries, almonds abound and, in addition, there are the fruits of Italy, oranges and lemons. Figs are well known. Are harvested throughout the island olives and chestnuts. The vine is thriving, and produces wines of good quality. In the bush, there are arbutus, whose berries and sourness are reminiscent of strawberries.

Livestock provides Corsican sheep, whose flesh is delicate, goats, which are consumed when young, especially pigs of very good quality, Porcu nostrale which are prepared for exceptional smallgoods.

The game is abundant in Corsica. There are still, but rarely, mountain sheep and wild sheep. Woodcock abound in the forests, and finally we can not forget to mention a very special way the blackbirds, fed of myrtle and arbutus berries, whose flesh is succulent.

The old French proverb that says: “Without thrushes, we eat blackbirds” can not be introduced in Corsica, where the hunter who has killed a few of these birds of such flavored flesh laments that among them there is a thrush or both.

Among the Corsican cheeses, we must include first and foremost the broccio, which is prepared in various desserts, such as fritelles and fiadones.

Corsican wines are varied and are excellent.

Among these wines, we mention those: Cape Corsica, Porto-Vecchio, Cervione, Olmeto, Corte, and sweet malvoisies, which is from the side of Cap Corse.

Among the preparations of fish and shellfish include: various fish soups, some similar to the Marseille bouillabaisse, and of course, flavoured with garlic, pepper, chilli and saffron anchoïade, similar to what is found in Nice, finally various items used in the series of appetizers, various shells, small crustaceans and other seafood that is eaten raw or in broth. But it is worth mentioning a particular way stockfish is prepared as in Nice, lobsters that are cooked in broth or steamed, and the whole series of creek fish that are fried in olive oil or prepared steamed, au gratin, fried, or in other ways similar to those we use on the continent.

Corsican charcuterie (smallgoods) is distinguished by unique products: the lonzo, pork prepared in a special way, and that is, we may say, the local dish, coppa, salami so very spicy, prisuttu ham vintage, omelette broccio, the figatelli, kinds of sausage of pork liver.

Pork stew with beans, stuffato of sheep, assaignes, the prémonata of beef, braised beef with juniper, the missiasoga prepared with smoked goat dried in the sun, and the goats roasted or stewed, the mississa , slashed pork, marinated, smoked and cooked on the grill, Tripa, belly or intestines of sheep that is stuffed with a mixture of spinach, chard, herbs. That is bound with sheep blood, which is then strung and is cooked in salted water.

Do not forget, polenta that is prepared as in Italy, accuncciatu, stewed horse meat, lamb and mutton with potatoes, and, finally, tripettes, preparing with small intestine of sheep detailed in square pieces and sauteed in the pan, with lard, with tomatoes and various condiments.

Finally, we include a few more dishes, sumptuous blackbirds (the famous blackbirds), prepared roasted, often surrounded by leaves of sage, stew or pie, woodcock to cacciatore, the partridge stew, the pibronata boar sauce.

In the register of sweets: the briolis prepared with chestnut flour, the fritelles, broccio kinds of donuts, the fiadène, sort of flan prepared with broccio and flavored with vanilla, the fiadone, another flan, the panettes, sweet kind of bread with eggs and sugar, garnished with raisins (these breads are eaten especially on Easter Sunday), the torta, cake topped with pine nuts or almonds and pine flavored with anise; migliassis, cakes that are baked on chestnut leaves; jams of lemons, and those that are prepared with other fruits of the country, which we have said, are very fragrant; chestnuts prepared different ways, and with which they manufacture many desserts and pastry.