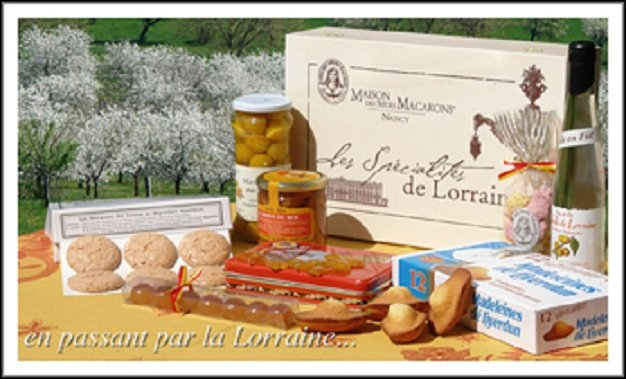 As in many regions of France, food plays an important role. Renowned for its quiche, Lorraine also has a repertoire full of delicious specialties. The Moselle, Bayonne and Xaintois are known for their plum recipes (pie, brandy …).

The Valley of Fensch also has its specialty, wagotine. Nancy is famous for its macaroons and bergamot, but also it is the city where were invented the Baba au Rhum and Bouchees a la Reine, the Lunévillois for its Pate Lorrain, Boulay-Moselle also for its macaroons, Verdun for its Dragees, Metz for its Tarte au Me’gin, Commercy and Liverdun for their madeleines,

Rambervillers for its calf’s head, Vittel for the frogs, La Bresse for its sweets and honey from Vosges’ fir, Val d’Ajol for its sausage. The Potee Lorraine is a peasant’s dish made of potatoes, cabbage and pork from farmland in the region.

In 843 the Treaty of Verdun gives rise to the median Francie. This territory, first under Germanic influence, will gradually be absorbed by France. Lorraine ceases to exist as an independent state in 1736 in the agreements formalized by the Treaty of Vienna.

After the Diet of Augsburg in 1500 the various political entities in Lorraine are members of the Circle of Haut-Rhin of the Holy Roman Empire.

By the Treaty of Saint-Germain in 1641, Louis XIII hands Lorraine to Charles IV, whose imprudence soon rekindle the war. The same year, the French took the country a second time, the last fortress, La Mothe, falls into their hands in 1645, it became a symbol of resistance Lorraine.

The Treaty of Ryswick (1697), which ended the war between the Empire and France, removed Lorraine from Louis XIV and gave back to its rightful Duke Leopold, son of Charles V. The Lorraine, whose long French occupation could not cool the patriotism, greeted with enthusiasm their ruler when he returned to his duchies.tations they had based on him should not be deceived. Desiring above all to repopulate its states, Leopold multiplied his efforts to recall those of his subjects who had to expatriate and foreigners as well.

The prosperity of the Lorraine could not excite more lusts from France, and the force of arms could not insure she was going to get through political negotiations. The Dukes themselves, Leopold then Francois III, seeked a way to get in exchange for their duchies some less exposed states.

In 1735, while Duke Francis III was to marry Archduchess Maria Theresa of Austria, heir to the Habsburg, France refuses to see Lorraine and Barrois, almost landlocked in its territory.

Austria and France established an agreement under which Francois III renounces to Lorraine in exchange of Tuscany, while France then accept the Pragmatic Sanction. In order to afford the Lorraine loyalty and to restore the rank of sovereign to his stepfather,

Louis XV did not immediately annex the duchies in France but granted it, for life, to the former king of Poland, Stanislas Leszczynski, who from 1737 was the last sovereign Duke.

In 1790, Lorraine gave birth to four French departments: Meurthe, Meuse, Moselle and Vosges. In 1793, the last French enclaves are annexed, the Principality of Salm, centered around Senones in the Vosges, and the county of Créhange in Moselle.

Integrated into the Moselle February 14, 1793, the County of Sarrewerden finally transferred a few months later in Bas-Rhin Alsace to form the hump. The small manor of Lixing is the latest to join France in 1795.

During the Franco-Prussian war of 1870, many battles took place in Lorraine, Spicheren, Borny, Colombey-Saint-Privat, The Bourgonce, Rambervillers, then Brouvelieures, before the siege of Metz which marked the defeat of France.

Following this defeat, part of Lorraine was with Alsace ceded to Germany by the Treaty of Frankfurt (1871).

This part was made up of almost all the Moselle with the exception of the extreme west of the county (Briey, Longwy), they were added fraction northeast of Meurthe (Chateau-Salins, Sarrebourg) and some towns of Vosges (Canton Schirmeck and eastern half of the township of SAALES).

After the First World War, France regained the lost territories in 1871 through the Treaty of Versailles signed in 1919. Territories originally taken to the Meurthe and Moselle formed a single department, Moselle, within limits that are significantly different from those of the homonymous department before 1871.

As Lorraine is a great lover of good things, the Lorraine specialties reveal sophisticated compositions.

First specialty, Quiche Lorraine. It was founded in the sixteenth century. It has three basic foundations of the Lorraine kitchen: bacon, cream and eggs, all on a fluff or puff pastry. Its international reputation is second to none. This seemingly simple dishes reveal the talented masters of cooking.

Another specialty essential, the Potee Lorraine. This is an easy dish where the natural flavor of local produce, carrots and leeks, mingles with that of smoked meats. In the past, the women put on the fire in the morning. Cutting a good piece of bacon or salted ham, they placed it in a cast iron pot. Cold water, beans that must cook a moment before adding a smoked sausage. Then they gave free rein to their imagination, and put all the vegetables in their possession. An onion, a few turnips, a leek, a bunch of carrots a lot of cabbage, potatoes to fill the pot …

From the seventeenth century, the Lorraine had mastered the art of preserving pork, using the shallot, onion and salt guaranteeing the products, after smoking.

Historians tell us that before the industrial age, “chaircutiers” in Lorraine had acquired a reputation of knowing “mayencer” ham and sausage, the meaning of mayencer is salting and smoking.

This reputation is not long to cross the borders of the province, and barges are many who come to refuel in Fuzeaux, Magots, Chaudinss and other cuts.

Gingerbread spices. Around December 6 in Lorraine is celebrated St. Nicolas.

The patron saint of children and students, St. Nicolas rewards good children with chocolate and gingerbread while the Pere fouettard distributes “triques” to disobedient children. Many parades are held in the streets of towns and villages in Meuse. On this occasion the gingerbread takes the form of the patron saint.