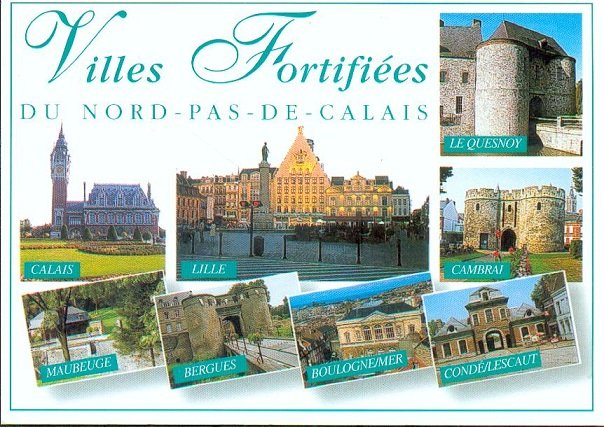 The cuisine of Nord-Pas-de-Calais is largely inherited from the county of Flanders, with some English influence and also from Picardy nearby.

Between land and sea, its core products are herring, rabbit, potatoes and beer. This is historically a region using butter or lard, where oil is little used. It is characterized among other things by the taste of bitter sweet flavors such as the braised chicory, cooking with beer or coffee chicory.
Mussels are a specialty of Boulogne and Calais, the dish moules-frites is the symbol of the festivities of Lille.

The region is producing cheeses, the most famous Maroilles is used in one of the varieties of flamiche.

The area was known for its agriculture at the time when it was part of the Belgian Gaul. Pliny mentions the great diversity of cultivated vegetables: onions, cabbage and beans, as well as different varieties of apples. Vast expanses of grain and barley allowed the manufacture of bread but also cervoise (ancient beer). The coastal salt-works produced salt used for preserving meat and fish: ménapien ham, salted or smoked, and was reputed in Rome.

In the Middle Ages, the region was Christianized, abbeys became owners of land and many organized the operations. The tithe was paid in kind – for example by giving Maroilles cheeses, created around 960 by the abbey of the same name and which “edict pastures” imposed its manufacture by each owner of vache.

The Catholic Church asked to fast about 166 days per year, herring was therefore extensively used by the people, and it was from Boulogne-sur-Mer, a major fishing port. The regular size fish caught meant that it was used as the unit of payment, or the payment of tithes.

Vine acclimated and cultivated by the Romans remained until the Little Ice Age, but its production was not standardized, it also provided verjuice to accommodate dishes. Beer remained a popular drink, while the Counts of Flanders and Artois imported wine from Bordeaux and the abbeys possessed vineyards in other regions.

Counts of Artois or dukes of Burgundy held feasts as memorable banquet, such as the Pheasant Banquet in Lille in 1454, and those in the castle of Hesdin. They offered roasted poultry, multicolored jellies, juice fountains and live shows. Their cooks did not leave cookbooks, but the Vivendierquoi is usual, inspired by Viandier de Taillevent, there is already the recipe for potjevleesch.

Coffee was introduced in the seventeenth century, it became a popular product with the industrial revolution, as hot drink that kept awake during a long day of work. In Germinal, Zola presents it as a staple, just after the bread.

In the early nineteenth century, the continental blockade led to the development of the sugar beet to compensate for the absence of sugar cane. Well it is at this time that began to be roasted chicory, to replace coffee.

Brewing in the abbeys gradually decreased in the region, the Trappists settling rather just across the border in Chimay, Westvleteren and Orval. It gave way to many artisan breweries, the region had a thousand in the early nineteenth century, and nearly two thousand in the first half of XXe. The taverns multiplied also, relaxing places par excellence. To distract them, the allotments were created at the instigation of Father Lemire, the settlements also included gardens where workers grew vegetables and raised a few chickens or rabbits for special days.

As in the rest of France, eating habits in the Nord-Pas-de-Calais evolved from the late 1960s. Birthplace of modern French supermarkets, the region is also the source of fast food chains such as Flunch from 1971 or Paul bakeries, aiming towards a certain quality. Most meals are taken at home, however, with the family.

The region remains one of the main consumers of beer, but now young people are turning away from this drink especially appreciated by adults, in favor of sodas and occasionally prémix. Daily consumption remains important, especially in men over 55 years.

Culinary traditions endure more during festivals: bake holiday season, or croustillons of ducasses. They will also renew the Tradition of the moules-frites Lille flea market dates back to 1970, the throwing of herring during the carnival of Dunkirk, 1962. One of the latest to date is the international festival of soup at Wazemme,s reminiscent of the multiculturalism specific to the région.

Meats are also preserved in various smallgoods, including horsemeat with the Nord-Pas-de-Calais is the first consumer among the regions, with the flagship being the horse sausage.

Each city has its specialty meats: Lille has the Petit-Sale, Valenciennes the Lucullus Tongue. At Cambrai it is the andouille sausage and in Cambrai it has the distinction of being made of veal, not porc.

The region still has twenty brasseries, from which most famous beers are exported, Jenlain the Pelforth, 3 Monts, Goodale, and Ch’ti. Other beers for more local diffusion are also considered: they is for example the Grain d’Orge, Abbaye de Lille, the Angelus, the Munsterbräu, the Page 24, Hommelpap, The Choulette, the Moulins d’Ascq, or the Bavaisienne Bracine, also beers that are extra-strong like Biere du Demon and the Belzebuth. Beer also acts as an ingredient in many recipes.

The Picon, liqueur for aperitif, bittersweet, adorning beer, is not a local product, but the North is one of the major consuming regions, with Alsace.

The Nord-Pas-de-Calais offers a wide range of cheeses, made mostly cow milk. The most famous are the maroilles and mimolette. Other cheeses are renowned, bergues the Boulette d’Avesnes, the Mont des Cats, vieux-Lille, Pave de Roubaix or the old Boulogne, which would be one of the most smelly cheeses in the world.

Flemish influence is found in dishes simmered in beer, eg with cock in beer, the bitterness that is often softened by a sweet flavor such as the gingerbread in the Carbonade Flamande, or the fruits, such as rabbit with prunes. These dishes, especially rabbit are typical celebration dishes.

Mussels are a specialty of Boulogne and Calais, they are prepared in white wine, or with a dash of vinegar and served with French fries. They are also an ingredient in fish recipes “Boulogne-style” in caudière, a fish soup in Étaples, as well as the cream of cauliflower with mussels, specialty of Audomarois.

A dessert of choice for family meals in the North is the pie, traditionally dough-based. It can be simply apple or rhubarb, but local specialties are papin pie (also called Tarte au Libouli) which is filled with custard and sugar, topped with a preparation vergeoise.

Sugar used in the Nord-Pas-de-Calais is that derived from sugar beet, the brown sugar (in the region called Cassonade) is a sugar annealing, soft and fragrant. It is especially used for desserts, eg sprinkled on pancakes, cooked with beer often in the region, or on waffles Belgian-style and those called de Liège.

It is used as a topping in stuffed Lille waffles.

Other specialties are prepared during the Christmas season. Speculoos biscuits, spiced biscuits were originally in the shape of Saint-Nicolas, and made this day. They are now in various forms and consumed throughout the year.

The region has about 25 coffee roasters, the local taste is a medium roast, color “monk’s robe.”

Another typical drink of the region is juniper, a strong alcohol based on eau-de-vie and flavored with juniper berries, “sweet, hot and spicy” in the words of the food critic Gilles Pudlowski. The habit of pouring some in the cafe is named in the Nord-Pas-de-Calais under the term “bistouille” .

The cuisine of Nord-Pas-de-Calais is largely unknown in French gastronomy, although some products such as Genievre de Houllies or Betises de Cambrai can be classified as Tresors Gourmands de France.