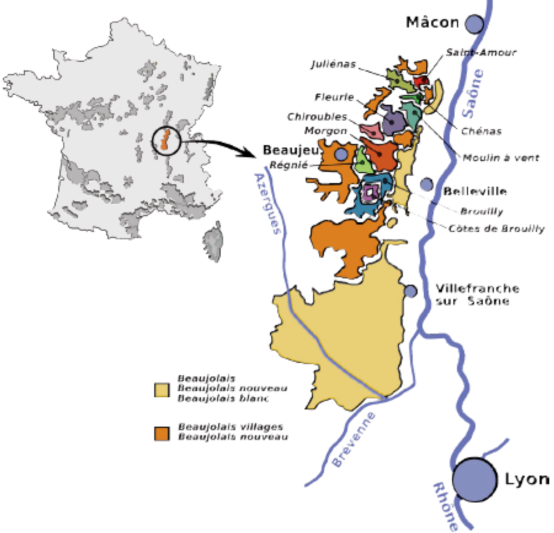 The Beaujolais is a French vineyard in the north of the Rhône department and some towns of Saône-et-Loire. Administratively attached to the Burgundy vineyards, the production area is in the foothills of the Monts du Beaujolais, between Lyon and Macon.

Located primarily on granitic and calcareous soils north to south, it produces red wine made from Gamay N3. The variety of soils has created twelve appellations of origin, two regional and ten municipal or local. Although this is a very old vineyard, it is always present in the news, including the media that have enjoyed the Beaujolais Nouveau.

Beaujolais is located in the vineyards of Macon, straddles the departments of Saône-et-Loire (in eleven municipalities in the canton of La Chapelle-de-Guinchay) and Rhone (of 85 towns, mostly in the district of Villefranche-sur-Saône) It stretches for 55 kilometers from north to south and 20 km wide.

The vineyard is backed by the mountains of Beaujolais, it is exposed to the east or southeast. The vineyard slopes between the first floor, separated from the Saône by a valley too fertile for vine and the beginning of the Beaujolais forest between 450 and 550 meters, depending on exposure and microclimate.

The climate of Beaujolais is a continental climate. Winters are cold and relatively dry. The continental influence is reinforced by the north wind: it supports the health of the grapes, it is blessed in summer and fall. However, in spring, it can cause devastating late frosts.

Fertility of secondary shoots of Gamay N does not always make up for the loss and provide an adequate return. Saône plays a moderating role on the harsh continental climate.

The altitude of the hills over the river, isolating the largest share of the vineyard winter fogs that frequently flood the valley of the Saône. The plots are mostly oriented to the east or south, purifying the grape from morning dew.

The range of wines from Beaujolais owes part of its variety to microclimates (related to the slope, exposure, protection of relief) as well as soils.

The white grape vines are mostly planted with Chardonnay B. Even if they are negligible on the surface, they are producing good wine, balanced and aromatic. Part is used in the manufacture of Crémant de Bourgogne.

The legislation allows other varieties: Aligoté B, melon B, G pinot gris, pinot noir N, N Bouze Gamay and Gamay Chaudenay N. These varieties of accessories, including the specifications of the different appellations restrict employment to 15% of the plantings.

The vineyard has two designations of origin regional and ten communal.

Ten municipal or local names, called “Beaujolais crus” exist. This is the Brouilly, Chenas, Chiroubles, Côte de Brouilly, Fleurie, Juliénas, Morgon, Moulin a Vent, Régnié and Saint-Amour. All these wines may be marketed under the name “Gamay Bourgogne.”

Legally, the Beaujolais is attached to the Burgundy vineyard in the judgment of 29 April 1930 Civil Court of Dijon.
Beaujolais has not less a specificity widely-honored, so that almost all publications mention the Beaujolais vineyards as a part of the Burgundy.

The Beaujolais have long been associated with the Lyonnaise cuisine. Very fruity red wines are well adapted to the local deli (jesus and Rosette de Lyon, sausage in brioche, crackling, etc..).

A local celebrity: Georges Duboeuf, born in 1933 and winemaker/vintner, the Beaujolais owes much of its fame and fashion of Beaujolais Nouveau to him.

Do White Claws Expire? What You Need to Know!