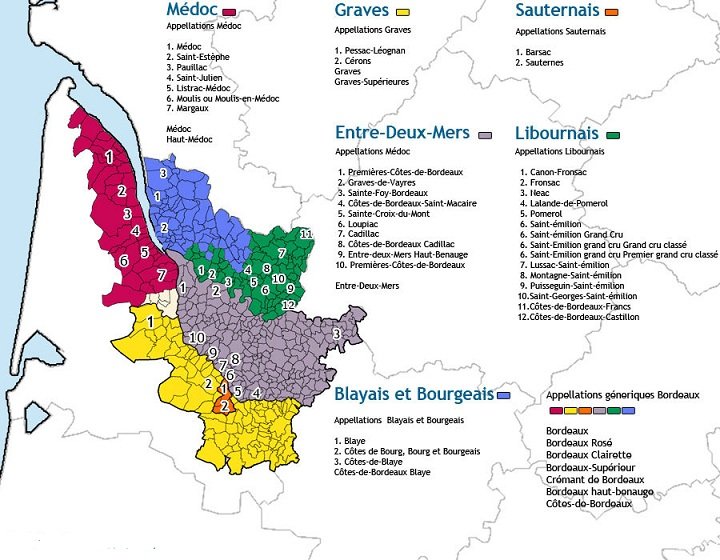 The vineyards of Bordeaux is the area gathering all the vineyards of Gironde, in the Southwest of France. Some wines that are produced are among the most famous and most expensive in the world, making bordeaux N 2 the global standard.

The production of wine is varied: 80% red wine (such as Pauillac or Pomerol) and 20% of dry white wine (such as Entre-Deux-Mers) or sweet (eg Sauternes or cadillac) , plus rosé, claret, and sparkling wines (Crémant de Bordeaux). The existence of 38 different names in the vineyard is due to the diversity of soils, that is to say, soil types, grape varieties grown, cultural practices and winemaking.

With 117,200 hectares cultivated and a production of five to six million hectoliters of wine per year, the Gironde is the third French wine department in terms of overall production after the Hérault and Aude, but the first for the AOC volume.

German, Russian, Flemish, English and Irish traders, settled in Bordeaux in the seventeenth century (include their names in those of current vintages: Lynch-Bages and Lynch-Bages, Mouton Rothschild and Lafite Rothschild, Leoville Barton and Langoa Barton, Boyd-Cantenac, Prieuré-Lichine, Kirwan, Cantenac Brown, etc..), especially outside the city walls in what becomes the Chartrons district that was covered in warehouses. During the reign of Louis XIV, Protestantism is persecuted and forbidden (by the Edict of Fontainebleau in 1685): the Bordeaux Huguenots fled to Rotterdam, Amsterdam and Hamburg, settling there as vintners.

The Bordeaux wine region is located in the Aquitaine region of southwestern France. Its boundaries are theoretically those of Gironde, but the appellation (not systematically planted) has 505 towns on 542 Department: excluded the sands of the Landes forest (the moors of Bordeaux), the heart of Bordeaux and too moist, fertile floodplains of the river banks (the “Palus”).

117,200 hectares were used for wine production in 2010 (the figure is the total of the harvest, excluding vines too young).

The Bordeaux wine region is traditionally divided into several subdivisions: the Medoc, Graves and Sauternes on the left bank of the Garonne, the Entre-Deux-Mers region between the Garonne and Dordogne, the Libourne, Blaye and Bourg on the shore right of the Dordogne.

It is a temperate oceanic climate, warm enough to allow the cultivation of vines even on flat ground. Rainfall is distributed fairly evenly throughout the year with rather rainy autumns. The arrival of earlier disturbance leads to a difficult year. Instead, the years with good off-season promise of good vintages. Temperatures give mild winters and hot summers without drought. The sunshine ensures a good grape maturity.

The white grapes are mainly Semillon B (7236 hectares) and Sauvignon B (5516 ha): the first is the grape variety of designations of soft or sweet wines, while the latter became the majority or exclusive in white wines dry. Muscadelle B (866 ha), Ugni Blanc B (213 ha), Colombard B (114 ha), white merlot B (25 ha), Chardonnay B (4 ha) and white Villard B (1 ha ) complete the palette. Sauvignon G with pink grains is allowed, but it is anecdotal.

These different varieties are blended together in varying proportions according to the producers and years, such as the trio Red Merlot – Cabernet Sauvignon – Cabernet Franc, dry white Sauvignon duo – Semillon, sparkling in the couple Semillon – muscadelle and the triad sweet Semillon – Sauvignon – Muscadelle. Given the prestige of Bordeaux, Merlot, and the Cabernet Sauvignon were planted in all the vineyards in the world.

The Bordeaux average yields are slightly lower than the national average for the AOC and designations vary greatly as well as producers. The lower yields are the specificity of Sauternes, the specification limits them to 25 hectoliters per hectare.

Château d’Yquem announces that an average of only 9 hectoliters per hectare. In red, the record is held by the garage wines (16 h ℓ / ha reported to La Mondotte (en)). The highest yields are allowed to produce AOC Crémant de Bordeaux (78 h ℓ / ha) and the Atlantic IGP (125 h ℓ / ha).

There are 38 names in the Bordeaux wine region in 2011 (registration of all specifications current year expenses), plus six denominations.

The main appellations in terms of volume are the generic Bordeaux, which can claim all the vineyards of Bordeaux, including the most prestigious appellations described below: it is claret (including burgundy-claret and burgundy names up -Benauge), claret-top and Crémant de Bordeaux.

All other brands, each limited to a part of the vineyard, can be grouped into several subdivisions: the Medoc, Graves and Sauternes on the left bank of the Garonne, the Entre-Deux-Mers region between the Garonne and Dordogne, the Libourne, the Bourg and Blaye on the right bank of the Dordogne.

In 2000, there were 9,820 winemakers in Gironde. The term “chateau” present on the majority of Bordeaux labels only rarely referred to the existence of the property of a stately home, except in the Medoc wines (they were built in the eighteenth and nineteenth centuries). There are up to 11,074 products baptized castles, including 997 vinified in wine cooperative.

Bordeaux, with a proportion of 60% of properties with more than 20 hectares of vines in 2000, is a vineyard where large areas dominate (the average French vineyard is 45%), especially compared to Alsatian vineyards (6% ) Champagne (11%) or Burgundy (20%).

Some areas are particularly large, one-piece, counting not only the vineyards but also some wood, such as Chateau Margaux with its 262 hectares or Chateau d’Yquem with 133 hectares. Smaller, with only a few hectares, located in the commune of Pomerol, which is a very fragmented vineyard (Château Le Pin is 2.7 hectares), plus the “garage wines” products, especially in the Libourne (Chateau Valandraud occurred on only 0.6 hectares at the beginning).

45 Gironde wine cooperatives account for 40% of growers (most often with small areas) and provide 25% of the departmental production.

Classifications of Bordeaux wines have existed from the modern era (eg, those of Abraham Lawton between 1742 and 1775, and Thomas Jefferson in 1787), but the first official classification of Bordeaux dating back to 1855. It comprised the classified growths of the Medoc, to which was added the Chateau Haut-Brion in the Graves vineyard.

This list was accompanied by those of the white from the five towns benefiting from Sauternes and Barsac appellation wines. This classification has undergone a significant change: by order of 21 June 1973, Château Mouton Rothschild was promoted to the rank of premier cru.

For the most expensive wines (about 300 different wines, or 3% of the volume produced in the department), the producers offer for sale “en primeur” in the spring following the harvest for delivery bottled only a year and a half see two years later.

These are mostly foreigners who buy en primeur (nearly 80%), with some willingness to speculate on prices, hence the development of stock markets specialized in wine, such as the London International Vintners Exchange (or Liv-ex).

The main markets are in descending order: the European Union (including French market, accounting for two thirds of sales of Bordeaux by volume), China, the United States and Japan. In China, sales of Bordeaux in 2010-2011 represents a total of 380 000 hectoliters of wine, compared with 16 000 h ℓ of Rhone wines and 5000 h ℓ burgundy.

All critical devote a large space for Bordeaux wines. According to Robert Parker, “of all the major wine regions of the world, Bordeaux produces consistently the best quality. If there is also much devoid wines of complexity and character, the bad are rare. In terms of cabernet sauvignon, merlot and cabernet franc, Bordeaux remains the world leader. ”

The aging potential varies castles, vintages and appellations. If a generic red Bordeaux has an aging potential of two to five years, the wines of Blaye, Bourg and the Sainte-Foy are rather in the range of three to seven years, the satellites of St. Emilion (lussac mountain puisseguin and saint-georges) between four and nine years, and the burgundy-top, Fronsac, Canon-Fronsac, Lalande-de-Pomerol, Francs and Castillon must keep five to ten years, the meds from six to fifteen, the top -Medoc, listrac, Moulis and serious red seven to fifteen years, the red Pessac-Léognan, Saint-Emilion, Saint-Emilion grand cru and Pomerol from six to twenty years, while the best Médoc crus (Margaux, Pauillac, Saint -Julian and especially Saint-Estèphe) must wait up to ten years for the tannins to soften a little, can theoretically wait twenty years without a problem, see.

The dry and sweet white bordeaux to keep as long, they can be drunk within a year with a potential maximum of two to three, except for serious white and white Pessac-Léognan (which can wait up to ten or twelve years).

Finally have a sweet aging potential than the decade entries range (loupiac, Cérons, cadillac, St. Croix-du-Mont), twenty years for Sauternes and Barsac, reaching the century for meilleurs. For very long aging wines, plugs, chosen particularly long, must be changed every 25 years: This service is provided by the great castles complete with wine bottles before the recap).